Some of the benefits include:

People are extraordinary creatures on planet Earth when it comes to coping with stress.

An animal activates its stress response system – in other words, the stop everything else, you’re in danger system – when it’s truly facing a life or death situation.

If an antelope is being chased by a lion, the system produces adrenalin or epinephrine to focus all its energy on escaping. Let’s
hope that the antelope escapes.

It flees its predator, but when its system goes back to normal, it stops worrying about facing that lion danger again in the future. In another word, antelope
thinks: “I was stressed as hell, but I am back to normal. I can live my happy antelope life and not worry about being eaten by a lion again.”

This is because an antelope experiences only physiological stress.

But, we humans are of different nature

<< We don’t live in Savannahs anymore >>

Now we humans have physiological stress too. When we face danger, we activate our stress response system, just like the
antelope did, and we do our best to flee the danger. The very thing that separates us from antelope is this: we worry. The doubt and trouble stay. We don’t have to be chased by a lion anymore,
but we can still produce stressors like hell, because: “What if that happens again?” This is very human. It’s called psychological
stress.

Psychological stress, worrying, helped us a lot back in savannahs. To a point, it is even helping us in contemporary modern societies. That question after escaping that lion, “What
if that happens again?” urged us to develop a special part of our brains, the cortex, which divides us from the rest of the living
creatures on this planet.

Because this psychology is driven by psychological stressors, we had to adapt if we wanted to survive.

We don’t live in savannahs anymore!

Yet we all still have is that same raw stress system that we had when we did.

The real problem is, the consequences are the same.
Stress responses are a huge interference in our normal organism functioning. Remember the explanation of the stress response system at the beginning of this chapter: stop everything else, you’re in a danger system?

It means that an antelope stops digesting its food, reproductive organs are turned off, the cardiovascular system has to adapt to different circumstances, etc. It has a huge effect on normal body functions. Well of course, when you’re chased by a lion, it’s clear why.

Stressors trigger epinephrine, glucocorticoids (the stuff you don’t want to have in your bloodstream too often) to be released in
both physiological and psychological stress. If you’re stressed all your life, the probability of chronic diseases is much higher than they are in a balanced, tranquil individual. Robert Sapolsky, in his
book, Why Zebras Don’t Get Ulcers, explains exuberantly, that diseases can occur when a person is plagued by chronic stress.

What a jungle ain’t it? Our 21st century Savannah

Provanax is a legit remedy against civilizations – lifestyle

Of course, a piece supplement is not the whole picture of getting rid of depression, anxiety, or improving your mood.

That biggest remedy is of course a lifestyle change.

Simply, the art of not giving a F*ck.

There comes consciousness through meditation in the practice.

Building and maintaining your closest relationships.

Having a life’s pursuit that has meaning for you and it’s worth pursuing.

Life’s a shitload of process, but it’s doable.

You want to do something with your guts & brains

80 % of serotonin, a biochemical responsible for happiness is created there.

You must take care of your guts.

Provanax is one of the few nutritional supplements on the market we know that combine stress-relief & mood-enhancing substances with probiotics.

Of course, we would not claim that simply provanax is any supplementation for probiotics, but it’s a nice complement to the stack.

Seed probiotics are the real champion of probiotics. Together with provanax you can really armor yourself for health

Is Provanax a solution for anxiety & stress

It’s an agent that can help your overall well-being thus helping your condition with anxiety & stress.

But, if it’s the real deal in mitigating it?

The main argument is this.

Provanax was once designed with a GABA-based nutrient called Phenibut.

As we said earlier, GABA is very effective in bringing down the excitatory potential of the central nervous system, thus it effectively reduces stress and anxiety.

However, GABA needs to cross the blood-brain barrier we mentioned earlier.

And just GABA won’t do the trick.

On another hand, Phenibut was designated to do just that, so it was more effective.

But, yes phenibut was banned by FDA and you can’t sell it anymore under FDA authority.

It is a little bit unfortunate, but that does not mean provanax is a bad supplement with a bad formulation.

Quite opposite, it’s our analysis and statement that provanax is definitely better for mood enhancement than as anti – anxiety and stress reliever.

Since mood enhancement and stress, help go hand in hand, claims that provanax is also an anti-anxiety supplement are not false.

The real beauty of this supplement is in mood-enhancing properties.

And it’s mostly designed for that.

The reason for that is provanax contains substances that directly or indirectly affect your gut.

In case you didn’t know – our gut is the place where our happiness and immunity reside.

Lemon balm extract – s considered a calming herb. It was used as far back as the Middle Ages to reduce stress and anxiety, promote sleep, improve appetite, and ease pain and discomfort from indigestion

St. John’s Wort is a popular substance sold as a dietary supplement on its own. And here you can have it as part of other powerful mood-enhancing substances. It contains many chemicals that act on messengers in the brain that regulate mood. People most commonly use St. John’s wort for depression and mood disorders. There is some strong scientific evidence that it is effective for mild to moderate depression.

Passionflower – is native to the southeastern United States and Central and South America. It’s been traditionally used to help with sleep. People use passionflower for anxiety, including anxiety before surgery, to promote sleep and help mild depression.

Valerian Root – has been here with us for a very long time. One of its benefits is that valerian increases the amount of gamma-aminobutyric acid (GABA) in the brain. As a neurotransmitter, GABA inhibits unwanted nervous system activity. Studies have shown that increased levels of GABA in the brain lead to falling asleep faster and experiencing better sleep.

So, you get a precursor that increases the amount of GABA in your system as well as the GABA itself.

5 – HTP  – This is a very important precursor of serotonin – the hormone of happiness. s an amino acid that your body naturally produces. Your body uses it to produce serotonin, a chemical messenger that sends signals between your nerve cells. Low serotonin levels are associated with depression, anxiety, sleep disorders, weight gain, and other health problems 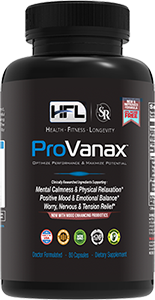